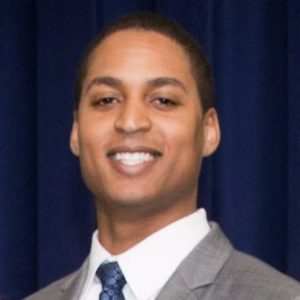 Travis S. Nembhard, is a lawyer, judge, and advocate. He brings an array of experiences, ranging from civil rights to finance. Travis is originally from Long Island, New York, but currently lives in Washington, D.C., where he serves as an administrative law judge for the District government. Prior to his appointment as a judicial officer, he served as legislative counsel within the Council for the District of Columbia, where he worked on issues such as increasing transportation accessibility for individuals with disabilities and eliminating fees for low-income District residents, whenever they sought to obtain vital records and documents like birth certificates.

Before working for DC government, Travis spent almost two years investigating white-collar crime, with a focus towards insider trading investigations within the Office of Fraud Detection and Market Intelligence at the Financial Industry Regulatory Authority, Inc. (also known as FINRA). He also volunteered his services for the New York State Office of the Attorney General (OAG) as an Assistant Attorney General within the Civil Rights Bureau. While at the OAG, Travis managed various cases pertaining to racial, sexual, and gender discrimination, along with landlord-tenant issues and mortgage fraud.

Travis attended Binghamton University where he completed a Bachelor of Science degree in financial economics, while competing as a Division 1 athlete in Men’s Varsity Track & Field. He later earned a juris doctor at the Villanova University School of Law with a concentration in business, corporate & securities regulatory law. During his studies, Travis worked at law firms, Goldman, Sachs & Co.., Northwestern Mutual Financial Networks, Tyco Electronics Corporation, ING Bank, the U.S. Securities and Exchange Commission, and the White House.

Travis is currently a member of the American Bar Association, the ABA Judges Initiative Committee, the JD National Conference of the Administrative Law Judiciary, and the Washington Bar Association. He was recognized as one of Forbes 30-under-30 list for 2017.

In his spare time, Travis enjoys playing basketball and football, watching collegiate and professional sports, and getting involved in the community. He also enjoys musical performances in most genres, as he used to play the tenor saxophone, clarinet, and piano. He has a passion for reading and writing, and views mastery of both skills as necessary to the development of our youth. As Chairman of the MC, Inc. Board, Travis brings his expertise in law, finance, and policy, along with his appreciation for the arts.